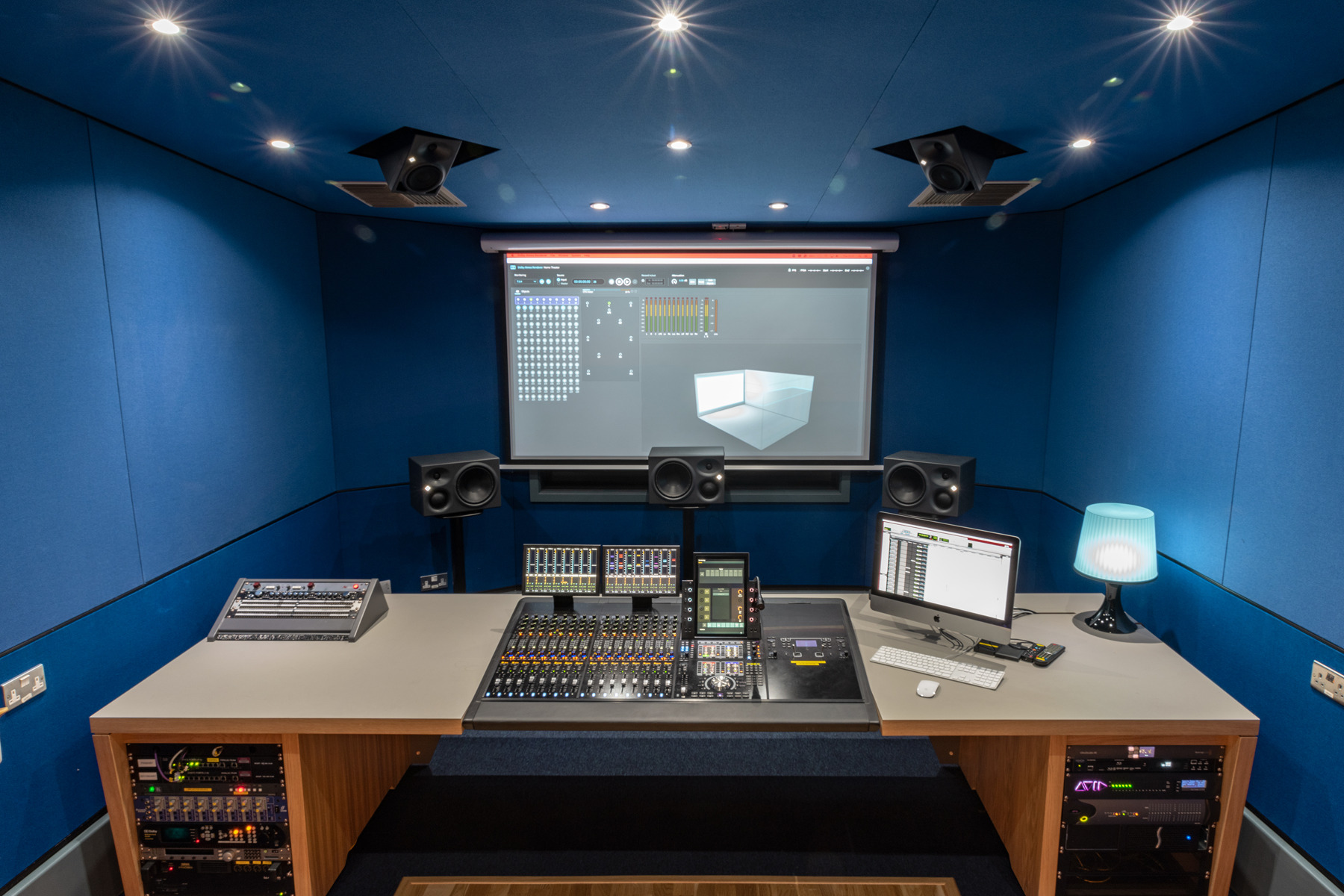 Wedemark/Berlin/Liverpool, 15 January 2020 – The Liverpool Institute for Performing Arts (LIPA) has enjoyed success across its array of course offerings since it was founded in 1996. With constantly high rankings in most government and independent measures, it boasts numerous high-profile and successful alumni in disciplines from acting, dance, and music, through to management, theatre technology, and sound technology.

In sound technology the institute is pushing forward into the future by developing new facilities and new courses that address emerging media formats and delivery platforms. Part of that plan includes building new TV production facilities and a 7.1.4 Atmos Home Entertainment studio. Neumann monitors have been confirmed as the monitor of choice across all the new spaces, continuing a long-standing and successful partnership between LIPA and Neumann parent company Sennheiser.

Jon Thornton is the Head of Sound Technology at LIPA and has been involved in specifying the new studios. He explains that one of the main motivators for choosing Neumann across the facility was consistency: "At least one set of monitors in each of our six main studios are Neumanns - either the KH 310, 120, or 410 models. Even though they are very different products and have different capabilities, there’s a shared response across the range, so as students move from studio to studio what they’re hearing remains consistent. That consistency and variety is important for learning about and understanding monitoring."

The new 7.1.4 Atmos studio was the first of the new facilities to be completed in January, with a structural refit of an existing room by UBE Service and integration by Studio Care, Liverpool. The left, right and centre monitors are Neumann KH 310 tri-amplified near-field units, while the surround, rear, and height speakers are Neumann KH 120s. The subwoofer is a Neumann KH 810.

Choosing Neumann for this room in particular draws on Thornton’s previous experience with 5.1 rooms at LIPA. "We found that the monitors had a very even response across the HF axis. For a lot of things we were doing in 5.1, that meant the monitoring sweet spot was really nice and easy to achieve. That’s just as important when stepping up to the immersive formats."

Another consideration was room tuning and the developments Neumann has made in DSP, delay, and EQ options for the monitors: "With Dolby Atmos, all those things are even more important. Being able to manage delay, time of flight, and equalisation across the speakers is key."

The very practical issue of speaker placement was also a consideration, taken care of by Neumann's extensive mounting hardware selection. "When you’re designing a facility like this, where and how you position those speakers is crucial." says Thornton. "In a 7.1.4 space, it's not always straight forward. There was a lot head scratching by our contractors when it came to creating geometric recesses in the ceiling for the height speakers… But there’s such an incredible array of mounting options for the speakers themselves, in the end it was very easy to get them in the right place and pointing in the right direction."

The new TV facilities at LIPA have been designed by Whitemark Limited, with Aztec as contractors and systems integration by Wire Broadcast. The rooms include a new television production studio, gallery, and sound control room, plus another 5.1 post production studio.

What was previously the Sennheiser Studio Theatre is being renamed the Sennheiser Studio. Thornton: "Its purpose has been changed from one that was primarily a performance space for theatre to what we hope is a very forward-looking TV production studio, but one that embraces new ideas as well as tradition workflows. At the forefront of our thinking is that it’s not just for traditional TV production, but also for working with 360 video, VR, AR workflows, and with Sennheiser’s AMBEO systems. We’re currently developing courses specifically dealing with these new mediums."

Thornton sees the combination of Sennheiser and Neumann as a potent mix for the future of next-generation audio. "You get an enormous amount of reliability and quality in the products, and there’s a wealth of knowledge and support," he concludes. "We’re looking forward to what will be really exciting developments in immersive sound particularly, and it’s great to have partners that are not just producing products, but are working to find out how best to employ them and how best they can be used in the future. It’s about having that over-arching concept or idea, and then working with customers and the industry to get it right. That’s been great."

About Sennheiser and Neumann
​Shaping the future of audio and creating unique sound experiences for customers – this aim unites Sennheiser employees and partners worldwide. Founded in 1945, Sennheiser is one of the world’s leading manufacturers of headphones, loudspeakers, microphones and wireless transmission systems. Since 2013, Sennheiser has been managed by Daniel Sennheiser and Dr. Andreas Sennheiser, the third generation of the family to run the company. As part of the Sennheiser Group, Georg Neumann GmbH, known as “Neumann.Berlin”, is the world’s leading manufacturer of studio microphones. Founded in 1928, the company has been recognized with numerous international awards for its technological innovations. Since 2010, Neumann.Berlin has expanded its expertise in electro-acoustic transducer design to also include the studio monitor market, and has recently added studio monitoring headphones to its portfolio. In 2018, the Sennheiser Group generated turnover totaling €710.7 million.